Welcome to this week's Poll Post. Because of illness, I was only able to get one poll built for this week, that being the Stones poll, and as it was, I only just got it published. But this is only the third time since January of 1999 where being ill has gotten in my way of running all of the polls in one week. But since I've only been feeling somewhat better today (Sunday), I still don't feel up to writing out the Poll Post, so I'll just keep this short. For this week's Stones Poll, we enter week 1,224 of voting and week 115 of rating all of their songs. The new question for this week is this: Rate the Stones song “Doom and Gloom”, from zero (lowest) to 10 (highest).

"Gloom and Doom" was recorded and released in 2012 on the GRRR! Greatest Hits album (you know, the album with the cover that most Stones fans totally hated), and this one was one of the two new songs released on that album ("One More Shot" was the other song). The music and lyrics to "Gloom and Doom" were both written by Mick Jagger, alone, but still credited to “Jagger/Richards”. When the band put this one together, it was the first time they were all in the studio together in seven years.

While the song is full of energy, it didn't do that great on the charts, as it peaked only at #61 in the UK, but did a little better in the States, reaching #26. The lineup for this one was: Mick Jagger – Vocals, Rhythm Guitar and the opening Guitar Riff, Percussion; Ronnie Wood – Lead guitar, Lap Steel Guitar; Keith Richards – Rhythm Guitar; Charlie Watts – Drums.... with Darryl Jones on Bass Guitar and Chuck Leavell on Organ.

Last week at the Stones weekly poll, we asked this: Rate the Stones song “Paint it Black", from zero (lowest) to 10 (highest). 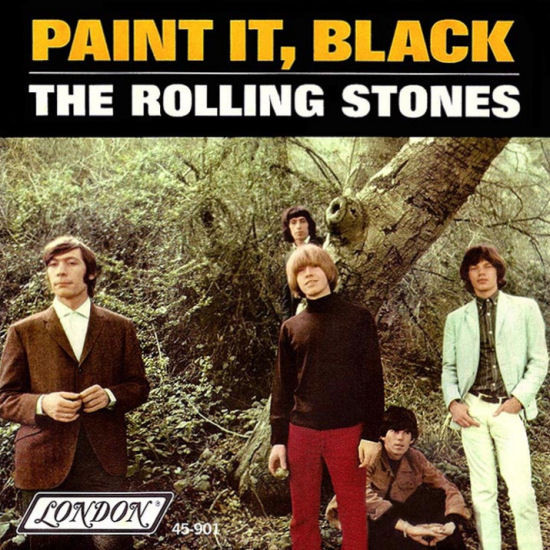 “Paint it Black” from the single’s American front cover

Yep, “Paint it Black” did great as I and you all knew it would, scoring a 10 and landing in the Top 10 ratings of the Stones standings, with its 10-rating score taking in 96.7% of the vote. To see the poll’s full, finial results, just click here: Stones Weekly Poll - week 1,223. Since I’m not feeling up to working on the Stones Rating page tonight, I’ll have the results up there sometime by Monday afternoon. You can find that page here: Stones Song Ratings & Standings - List Page 5

So, this is where I normally talk about the new Rock Poll, but again, there won’t be one this week. As far as the results from last weeks poll, well first, the question from last week was: What is the greatest all-time intro to a Rock Song? (Part 2 of 3)

Now, since I haven’t gotten around to finalizing the tally for this poll from last week yet, I'll list the results from Part 2 of the songs that made it into the finial part, here, in a reply to this Poll Post in the next day or so. And, Part 3, the finial part of this question, will now be held a week late (next week).

To finish up, at the Beatles Poll last week we voted on this: Rate the Beatles song, “Day Tripper” , from zero (lowest) to 10 (highest). Like at the Stones poll last week, we all knew beforehand this song would also score a 10, and it did, taking in 75.4% of the vote. To take a look at the poll’s finial results, just go there: Beatles Poll, week 613

As I noted above about the Stones Poll's list rating page results, the same deal applies to last week’s Beatles Poll list page, as I'll post that poll’s results at the Beatles rating page at the same time when I put together the Stones page. So, when that’s done, to see those updated standings, just go here: The Beatles Song Ratings and Standings page .

Okay, that will do it for this short Poll Post. I'm sorry that I couldn't get the other polls ready for tonight, but I was so bad off last Tuesday night into early Wednesday morning that my family had to call 911 to help me out. I had a real bad, severe asthma attack, and such an attack can kill you if you don’t get care fast. I'm only getting over it now, and if you have asthma, then you know how that can be. So, I'm just hoping all is better for me in the next few days and then we can resume the other polls at that time. I also hope all of you have a good week ahead, too. If you live in America, you more than likely have Monday off this week for ML King Day, so enjoy your day off if that’s the case.

© 1998 - 2022 by Keno Internet Services, except where otherwise noted. All rights reserved.