So, I’m sitting here this afternoon with little to do for the first time in over a week, as the past week was very busy for me, as was this morning, too. But now as afternoon rolls around I’m bored, so why not write up that blog I’ve been taking about forever now. Truth is, I have already written some blog like stuff here, but nothing official yet, so this one will be the first true Mumbo Jumbo that I type out, and yes, I’ve taken Pluto’s suggestion that I call the blog what used to be the name of my newspaper column that I wrote for years, but of which I haven’t written in the last 5 or so years.

Just one note before I get started. I’m not in the best of moods right now and I’m feeling fed up with life and with many of my fellow man. So this might not come out to be a happy read – and the same thing happened about 2 months ago when I tried to write my first blog. But I’ll never get this thing off the ground if I don’t start writing this thing now regardless of my mood. So let me get the nasty stuff out of the way today. But if you rather not read anything that is negative or might be written in a downer tone, then just closed this post now and read no more.

I was thinking that I would write about just one subject at a time for this blog, but I got too much inside my head right now, so I guess for this one, I’ll cover several topics. For starters, something personal. I’ve been feeling down of late after learning in the last week that I will have to undergo surgery once again, this time on July 1. I actually had exploratory surgery 2 weeks ago that I didn’t share with too many people, in fact nobody online, nor any of my friends were told a thing, as I just kept it all to myself and family. But this next round will be more intense and its on my mind, and I can only hope that they can solve the problem I’m having and hope that I don’t have anything inside of me that will do me in. But in a nutshell, I suffering from a condition called dysphagia, and it’s not like I really want to get into it too much here, other than I can tell you that I’m losing weight, since I can’t eat properly anymore. Let’s just say I having difficulty in swallowing solid food when I eat, which leads to often choking, and yes, people have choked to death from this condition. Of course, there other issues, like what causes this? Or what organ in the body is messed up? For me, it’s my oesophagus, even if one would think it’s more a throat issue. The cause is what’s worrying me, and until they go in there and remove whatever the blockage is, not until then will they know if its cancer related. Sometimes it is and sometimes it has nothing at all to with the big C. Of course, the other things that could cause it aren’t too appealing either, like perhaps I had an undetected mini stroke, or maybe a form of dementia, which also causes this problem. Both of these ailments run in my family. But then again, acid reflux disease (aka GORD) also causes this condition, too, and that I used to have for years. I’ve been told there’s a good chance that is the cause, even if I haven’t had any issues with GORD for several years, as the damage could have been done over time and well, another thing that causes this health issue is old age, so the combo of the 2 might have caught up with me. I actually have to hope that’s what the cause is, and as the surgeon who I had a consolation with on Tuesday told me, with my old age and past history of GORD, it well may be just that. I actually have to hope that’s what it is.

Okay, so enough of that. I do have other things on my mind and rather forget about my health until when July1 comes around. So, I noted here at the end of last week’s poll post that I had new cams put in on top of my weather tower and left a link for anybody who cared to take a look-see. Really some great mountain views to see, but of course the very next morning after my post, and for almost this entire week, other than Thursday morning, it’s been almost impossible to see all or most of the mountains views (more so in the morning hours) thanks to summer wildfires burning to the west of here, that’s making things very smokey, to say the least. When I moved to Colorado back in the late 1970s, there were few if any wildfires in this state, and when one would hit, it was usually caused by dry lighting hitting a tree and the fire would be put out pretty fast. But then about 20 years ago, and out of nowhere, the wildfires started to happen and now they burn yearly, and more and more parts of Colorado and all of the other states to our west, has the same issues with this now common problem. What caused it all? I think you already know – unless you’re a total lying moron like our president, it’s because of the global warming that our planet going though, and that in turn causes climate change. Climate change is 100% real, and while some of it might have nothing to do with mankind, most if it is caused by us and our burning of fossil fuels. Only the asshole, lying tRump, denies it, but as a scientist, I can assure you it’s 100% real and 90% man made. So yes, do blame our political pigs for this and please do protest and vote out the current jerk who sits in the White House today if you love our planet and all of our children, who’s future us adults are fucking up.

Yes, I got even more things on my mind, things I’ve talked about of late at the close of past poll posts. Like how I feel these protests against the police are mainly a waste of time, since the cops just don’t seem to give a shit and aren’t listening to what they are being told, and don’t care for what the protesters are saying. You got to realize it takes a certain kind of person to want to be a police officer, and usually not a kind one. You will never find any hippie cops out there who actually cares for their fellow man. Then perhaps the biggest problem are the police chiefs who are in charge of these criminal cops. In some cases, yes, they have done their jobs and arrested bad cops. But for every bad cop who gets busted and convicted in a court of law, another 200 plus of them get off scot-free, even if they do go to trial. Plus it isn’t just black people who this is happening to, as we had in the last month that 75 year old man, and 7 year old boy – both of whom were white, injured by cops and who were not helped by the other cops who were there and who witnessed it all. Had both of these instances not been caught on tape, the police department would have lied and claimed what happened, didn’t. In fact, with the old man, the cops didn’t know it was filmed and at first, they did just that and claimed the old guy just feel down on his own, that he tripped. Yeah, old men trip easily, but once the film got out it was clear one pig pushed the old man to the ground and none of the many pigs who walked by didn’t do anything to help him, nor did they help the little boy who was screaming in pain after being hit by pepper balls. The cops just stood there watching and did nothing! Plus no charges were filed against the cops who hit the child! So that’s why I feel it’s all a waste of time. I’m not saying the protesters shouldn’t be happening, they sure should be. But in the end, do you really think any change to the police that is needed, will be made? 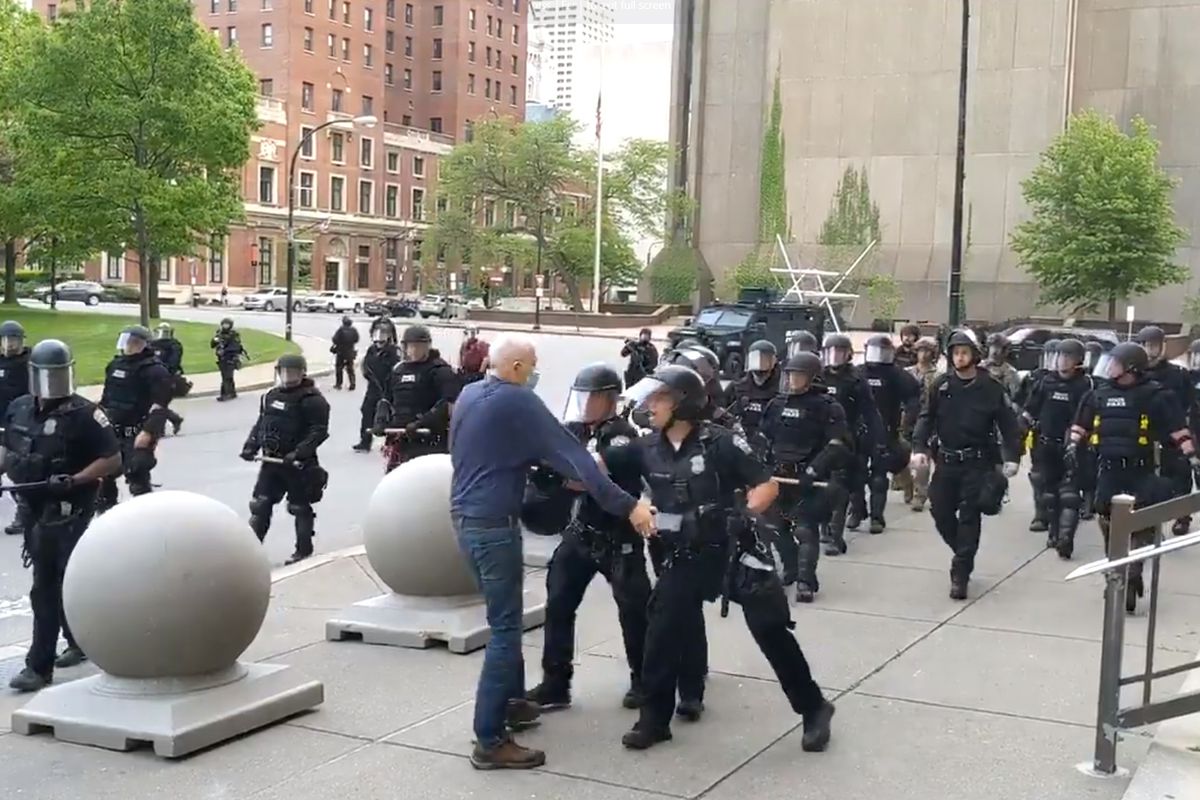 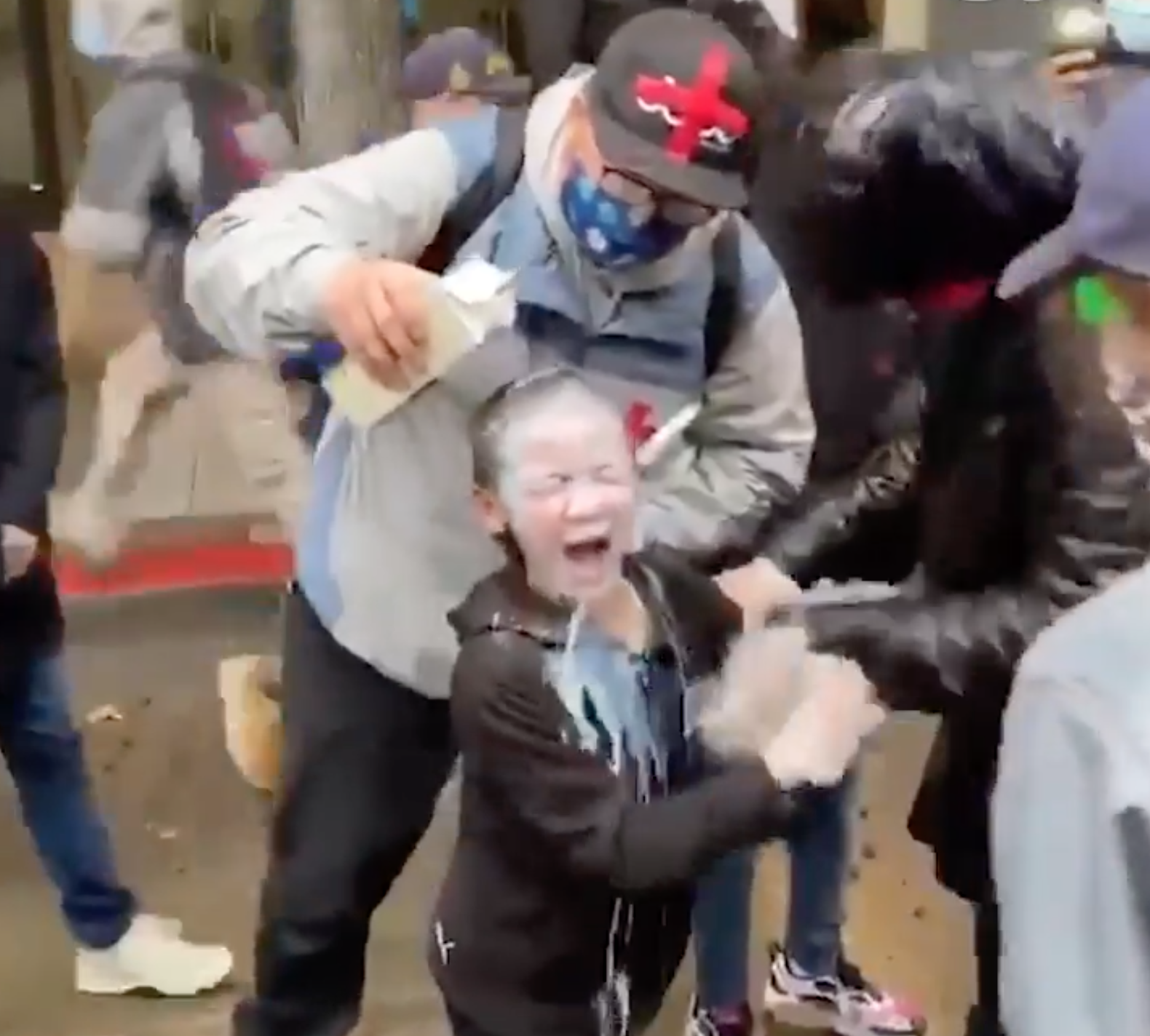 Cops while attacking an old man in Buffalo, and after attacking a little boy with pepper spray in Seattle, as onlookers help him

On a closing note, what the hell is wrong with the NBA? Talk about another bunch of rich morons (the owners) running a giant organization who have no clue in what they are doing while clearly not caring about their players who bring in 100% of their money. Why the hell are they gonna restart up the season and play all of their games in Florida of all places!? Florida has the second highest increase in COVID 19 cases in the entire country, and it’s been this way for weeks now. There are about 20 states where this holds true, yet there’s another 30 states where this isn’t the case at all. Why not play all of the games in one of those other, safer states instead? New York City officials have handled this virus better than pretty much anywhere else in the U.S., and it’s the media capital of the world, so why not have the games held there instead, at MSG? Or even split the games between MSG and at the arena in Brooklyn where the Nets play? This isn’t being done because of dirty politics – and nothing more, and where else other than in Florida, is politics dirtier?

Okay, so that’s enough bitching from me. Too bad there isn’t anything good to blog about, but right now there isn’t. Just bad health, bad climate, bad wildfires, bad cops, bad sports, etc. and a totally divided, messed up country thanks to a bad president. I hope in short time that I can instead talk/write about some good things next time, since I realize nobody wants to read about bad things that they/you already know about. But sorry, that’s the crap that’s on my mind at the moment. But at least I warned you before I started.

© 1998 - 2020 by Keno Internet Services, except where otherwise noted. All rights reserved.